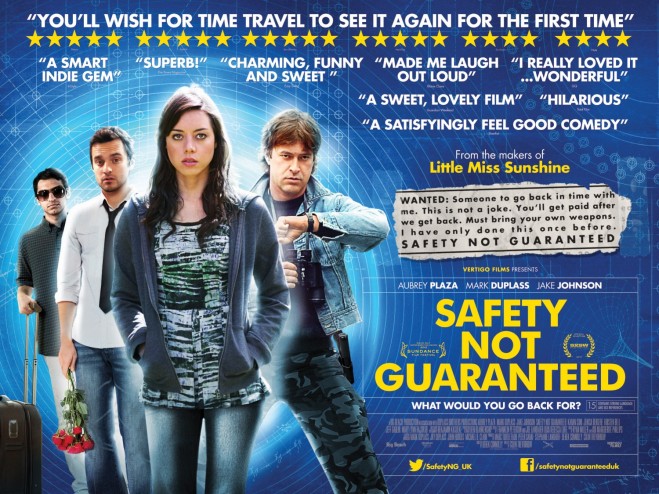 Safety Not Guaranteed is a story based on a simple premise; a man posts an advertisement in a local newspaper inviting someone to come time travelling with him. Obviously the guy is a nutcase so magazine journalist Jeff (Jake Johnson) uses this story as an excuse to head back to his hometown and waste company funds on a blow-out weekend to prove to his interns (played by Aubrey Plaza and Karan Soni) and himself that he’s not so out of touch with the kids and still knows how to have a good time.

When the trio track their man down for an interview, Kenneth (Mark Duplass) refuses to talk to Jeff as he feels he’s just being made fun of – which he is. As a plan B, Jeff sends Darius (Plaza) to pose as someone responding to the ad. From here she gets to know and becomes entangled in the goings-on of this madman’s life. Even though she thinks he is quite clearly crazy, she still connects with him emotionally. Perhaps at first out of pity but a genuine bond forms and she has to choose between what she’s there for and her loyalty to Kenneth as a friend.

It’s more than likely been said before but this is the kind of film that I think we need to see more of. Not in terms of storytelling and subject matter (though I can’t fault it for either) but in terms of how it was made. Here’s an affective film made on a shoe-string budget that carries just as much weight as any romantic comedy I’ve seen this year with a “proper” budget. You don’t need to spend over a million dollars to make people care for characters and this film proves it.

It doesn’t hurt that they talk about time travel too.