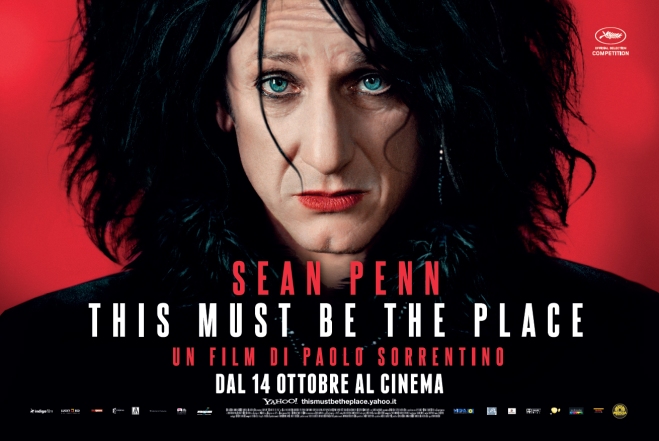 It’s an art film. For those who like their movies to tiptoe the fine line between parable and obscure nonsense road movie, this one’s for you. Written and directed by Paulo Sorrentino, this movie is his love letter to the music of the 80’s.

The story follows Cheyenne, an aging pop star that looks a lot like Robert Smith played pitch-perfect by Sean Penn.

Back in his day, Cheyenne was a huge musical force but now he’s just an aging, socially inept weirdo who dresses like a teenager. As a human being who exists after his socially constructed pop culture use by date, Cheyenne is virtually a ghost who spends his days in the company of his loving wife (played by the brilliant Frances McDormand) and daughter as he potters about their huge home. Every now and again he might venture out into the local Irish town to do day-to-day things like pick up bread and milk or have a meal at the local restaurant all the while continuing to be completely out-of-synch with the world around him.

The story kicks off when Cheyenne gets the news that his father – a holocaust survivor – has died. In an effort to pay respects, Cheyenne heads back to New York City which re-opens old wounds and highlights the lack of any real connection he had with his father while alive. To resolve this, he makes the decision to track down the source of his fathers’ lifelong torment, a surviving war criminal who as yet has avoided being brought to justice. This leads Cheyenne on a journey through Middle America which can not help but have an effect on his fragile character.

David Byrne (Talking Heads) provides the soundtrack and makes an appearance in this tale but that’s not the only reason I thought of the 1986 film, True Stories. The slice-of-life take on America as viewed by an outsider makes for some compellingly odd characters that help shape Cheyenne’s attitude and choices on his journey of vengeance.