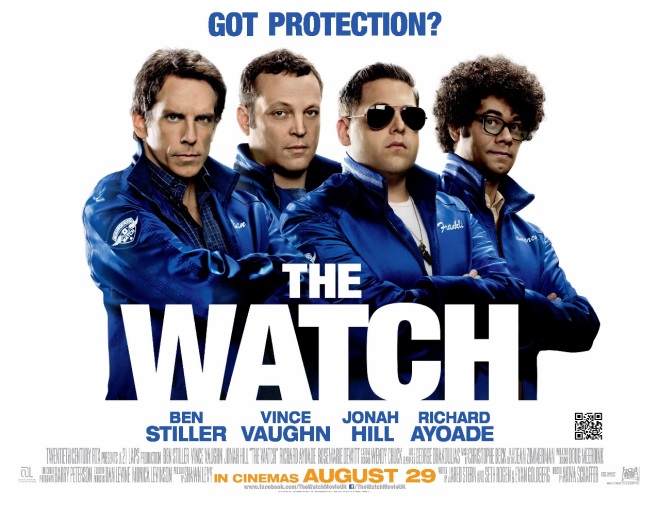 “I watched The Watch” is almost as much fun to say as the film itself. This is the latest Ben Stiller vehicle with Vince Vaughn, Jonah Hill and Richard Ayoade (WTF!? I hear you say. Yep. The awkward nerd guy from IT Crowd is in a Hollywood film).

Despite all these very talented people being on board, I had my own hesitations to seeing this film. Each has proven that they can produce quality work but reviews from other sources all seemed to sit in the realm of lacklustre. I thought maybe this would end up being one of those movies that suffers from “too many cooks…”

Turns out I was wrong and I’m glad.

The Watch is about Evan (Stiller), a middle-aged, married and upstanding citizen who manages the Costco in his hometown that he’s extremely proud of. Things are going great for Evan until the guard at his store gets brutally murdered one night.

To prevent further murders, Evan feels that it’s his civic duty to start a neighbourhood watch where he enlists the help of Bob (Vaughn), Franklin (Hill) and Jamarcus (Ayoade) who in their own ways each seem more interested in breaking the law than upholding it. The story unfolds as they patrol each night and soon discover that the culprit is extra-terrestrial. Evan suspects that his odd new neighbour (Billy Crudup) has something to do with it while the local police sergeant (Will Forte) has his eye on Evan himself as a person of interest.

The humour in this is the boyish stuff that we’ve come to expect from writers Goldberg & Rogan with some great performances by the cast (and it’s great to see Ayoade in more things no matter how out of place he seems with this crowd) and there’s even enough character development amongst the silliness to have us feel for them (but not too much) too.

For some good laughs, watch the Watch.