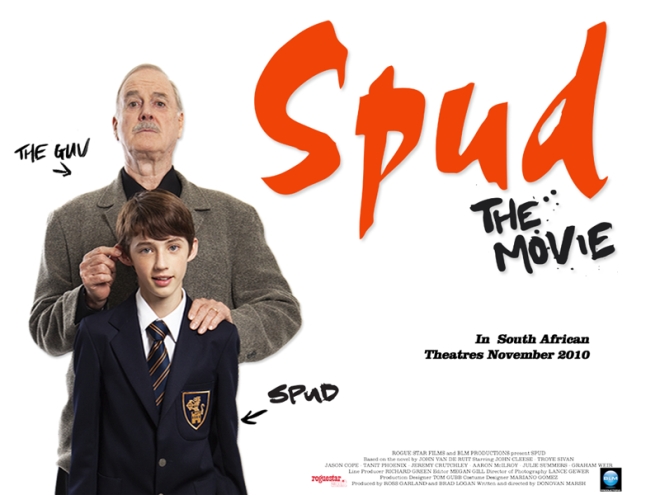 I had no idea what this movie was about when I picked it up and put it in my player. I only did this was because it’s been far too long since I’ve seen John Cleese in a new film and upon seeing him on the cover I was sold. I didn’t think I was the kind of person that did that but I guess it just goes to show how much I know.

Anyway, I’m glad I did it. This movie was made in 2010 apparently. It’s also set in a South African boarding school – something I didn’t realise until about 15 minutes in where I was thinking, “a) Where the hell is this set and b) what the hell kind of accent is that?”

So yeah, set in 1990’s South Africa just before Nelson Mandela was released from prison and although this backdrop is present, the film only skims over the politics of the times. The story is about John “Spud” Milton (a kid from a lower class family) and his first year at an exclusive boys’ school. Low income isn’t his only drawback – he’s also awaiting puberty. Something that EVERY other boy in the school is well into and this is where he gets his nickname “Spud” when they see that his balls have not yet dropped.

Having a hard time of it through hazing and the like, Spud’s only escape is reading and it’s through this interest that he sparks up a friendship with his English teacher, “The Guv” (Cleese) who takes a shine to him and opens up a whole new literary world for him as well.

There’s not much else to say. It’s a standard Coming-of-age story where the main character, despite all odds learns to adapt and overcome but it’s a fun ride nonetheless. Oddly enough, the time period it’s set in gave me a slight feeling of nostalgia (despite the fact I never grew up in South Africa and that I would only have been 10 and not 13 back then).

Cleese is perfectly cast (and the only name actor you’ll know due to the rest of them being South African) and the kid who plays Spud nails it but there’s something lacking in everyone else but that may have something to do with where it was filmed and the relatively unknown film industry that they have there.

Check it out, if only for John Cleese.