There’s been an assortment of pretty average Sci-Fi stories coming out of Hollywood recently. The freshest in my mind is Oblivion – the meandering yet visually appealing Tom Cruise vehicle, After Earth (the less said, the better) and now Elysium.

Elysium is Neill Blomkamps’ follow-up effort to the surprise hit that was District 9 (2009) and it’s that film that viewers will most likely compare and gauge whether they like this one or not.

Set in Earth’s future (the same year as Avatar, so I’m told) and it’s not a particularly happy one for our plucky blue planet. A future where the social elite (the folk with money) have moved off-world to a giant space station called Elysium to escape the pollution and poverty that humanity has caused. Earth is still used for labour and resources but contact between the two is kept to a minimum. Every now and then Earth refugees will try to make the journey across the sky to greener pastures but this unauthorised access is dealt with in a swift and harsh manner.

Our protagonist Max (Matt Damon) grew up in an orphanage on Earth and has always dreamed of saving enough cash to buy his way to Elysium. Having spent time in prison, he’s now working in a droid factory and skates the fine line between freedom and slavery that parole offers.

After a work related accident which gives him radiation poisoning and an incredibly shortened life expectancy, he makes the choice to fall back in with the old crew and take one last crack at a heist in exchange for the opportunity to get to Elysium (they have magic life machines up there that can cure him).

Like Oblivion, this film feels like a mash-up of existing stories with a slightly awkward romance tacked on. At times it’s part Mad Max, part William Gibson (Neuromancer, Johnny Mnemonic) and the world is more than a little reminiscent of a brilliant anime called Battle Angel Alita (even check out Astroboy (2009) which borrows the same concept) and there is some of the same awesome tech that made us fall in love with District 9 in there too.

Speaking of which, Blomkamp explores similar social themes as he did with District 9 such as control of wealth (and people by proxy) and the issues on both sides that arise.

It’s a fun little action movie with some fantastic visuals that sell this dystopian future perfectly and Jodie Foster is note-perfect. In other parts,the dialogue and delivery falls into B-grade melodrama (especially on the part of Sharlto Copley) but when a film draws so heavily from the traditions of 80’s action Sci-Fi, maybe one can overlook and forgive these transgressions.

If you like that kind of thing, definitely give this one a look. 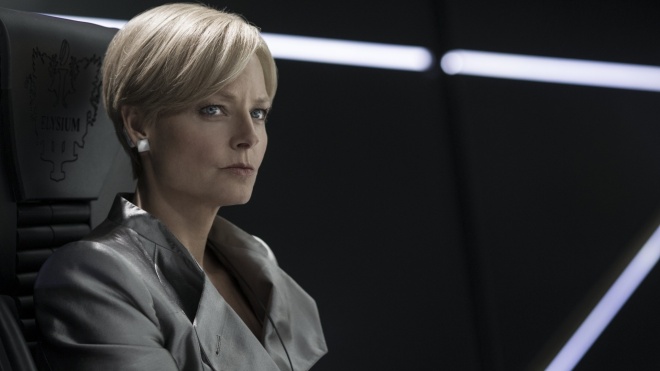