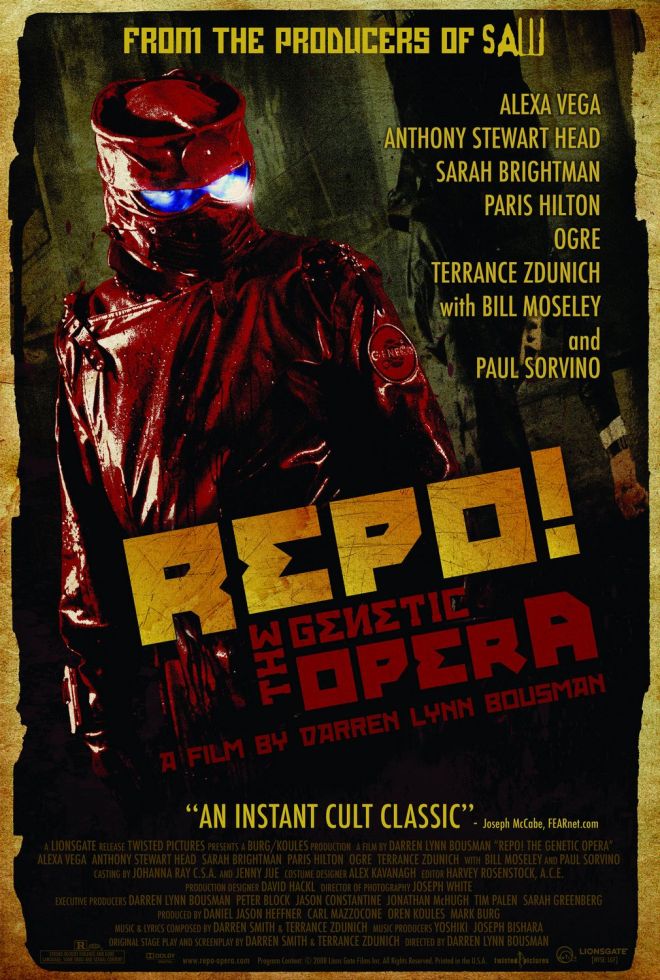 Okay, so this one’s a bit of a guilty pleasure. Honestly, the first time I saw it I wasn’t too impressed but then a few months later I found myself compelled to watch it again and it grew on me.

Since then I have this compulsion to re-watch it every now and then and I appreciate it more and more. What’s not to like? It’s a gothic (in both the classic and modern sense of the word) rock opera with Giles from Buffy The Vampire Slayer (or the Prime Minister from Little Britain if you prefer), the little chick from Spy Kids and Paris Hilton. Okay… stop looking at me like that and hear me out. Remember that I said guilty pleasure – now stop judging and listen.

Set in a dark future where through science, people are no longer beholden to the flaws of biology and body modification is a social norm. One company, GeneCo is at the top of the chain when it comes to servicing humans but their contracts come at a price. If payments are missed, the Repo Man is sent out to reclaim their property.

The story follows Shilo (Alexa Vega) who’s a 17 year old shut-in with a few problems medically and emotionally. Her doting father Nathan (Anthony Stewart Head) wants nothing but to protect her from the evils of the world outside – something he knows quite a lot about for Nathan is the Repo Man. When Shilo breaks the rules and leaves the confines of her room one night, she discovers the truth of the world outside in all its gory glory in the form of flesh addicts and musical exposition.

Anthony Stewart Head brings a little gravitas to the over-the-top nature of it all, Sarah Brightman (who – for some reason I cannot explain – I know from Webber’s Phantom of The Opera) pulls off the necessary vocal acrobatics and Paris Hilton actually puts in a worthwhile performance too. There’s also an appearance by Joan Jett and Ogre (ex-Skinny Puppy) for a little scene credibility. Bill Moseley has been thrown in there for good measure, as well as a particularly compelling performance by co-writer Terrance Zdunich as a gothed up grave robber/dealer.

If you liked Rocky Horror Picture Show and you’ve been waiting years for something like that and Sweeney Todd didn’t quite have the humour you wanted, check this out – it may just be what you’re been looking for.

Mike + Liam #002 Tea Gag
Homicidal Psycho Jungle Cat, A Calvin and Hobbes Collection by Bill Watterson from 1994. I didn't own this book until perhaps ten years later, but I did borrow a copy from my local library as many times as I was able when I discovered it had a respectable comics collection.
Adventure awaits...
An all-new six-part radioplay from the idiots at Potato Revolution.
Adventure awaits...
This is The Maxx Mini-Comic #2. It came free with Wizard Magazine #51 in 1995.
Mike + Liam #001 Debut
Getting a little mouthy over here.
Nakedfella Comics #7 (2nd printing, DVD edition) by David Blumenstein (@nakedfella) published in 2005.