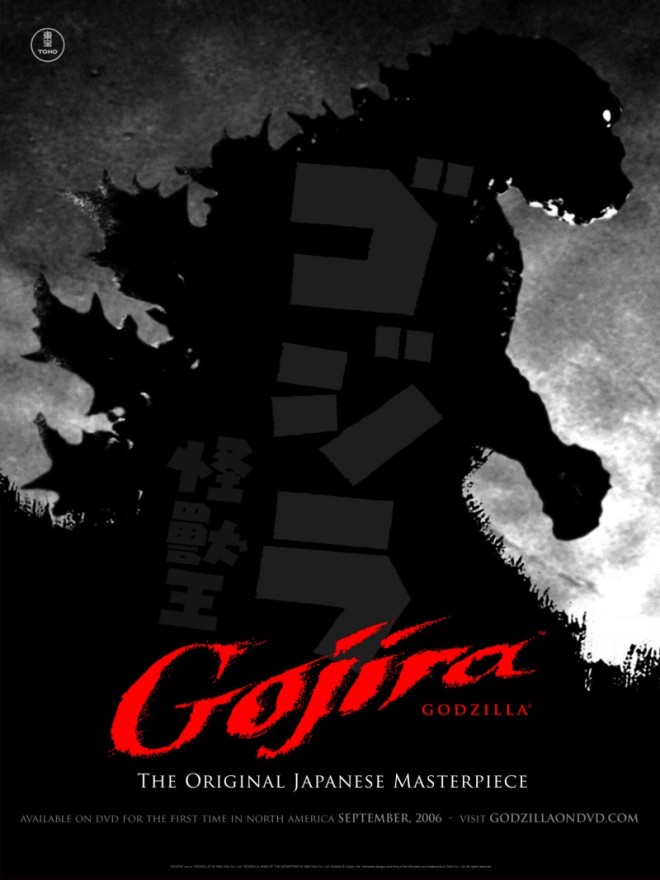 With Gareth Edwards’ remake having just been released, there’s no doubt in my mind that a bunch of you might like to check out the original to see where it all began. I know I did. If you by chance don’t have the patience to sit through it, here’s a blow-by-blow retelling of this magical tale…

The film begins off the coast of Japan where a boat or two sink for no apparent reason. Facts are sketchy but there are rumours among the locals that it was a huge creature of some kind that may have been the culprit.  A search party is sent out to investigate and then there is a hurricane on a nearby island. According to eye witnesses, the hurricane ain’t no regular hurricane either and so the Japanese government send a task force to solve this riddle once and for all. What they do find is high levels of radiation, giant footprints and eventually Godzilla who has a bit of a peak at them from over a hill.

The task force return to Tokyo to report what they’ve found and apparently it’s nuclear tests that have awoken this giant beast from deep underground where he was sleeping in a weird time pocket or something that also has live trilobites in it.

As a nation, Japan freaks out and the government responds by releasing depth charges in the area where Godzilla was last seen to get him away from Japan. It doesn’t work. Godzilla gets pissed off and decides to go for a stroll on the mainland, smashing up urban Tokyo along the way. Meanwhile a zoologist (who was the leader of the task force) is sad because the government want to kill Godzilla and he doesn’t think they should. Anyway, his daughter knows an evil scientist with an eyepatch who kills tanks full of fish in his spare time but doesn’t like to talk about it as people tend to frown upon that kind of thing.

Japan then decide that the best way to kill Godzilla is to electrocute him but it doesn’t work and he just ends up smashing more stuff and biting down radio towers for funsies.

Things are looking desperate – even the zoologist is having second thoughts about his pro-life hippie leanings.

The daughter, because she’s not a very good friend, tells her fiance-to-be about her sociopathic evil scientist mate and what he’s been up to. The two of them approach him and ask if he’ll share his death gift with the world and save Japan. The evil scientist thinks that maybe it’s not a good idea as it’ll look bad on his resume having been the inventor of a WMD but then they watch a TV show where some school kids sing sadly while images of death and destruction are interspersed throughout and he changes his mind.

From there they all get on a boat (the whole cast is there, the zoologist, the daughter, a man in a hat with glasses – all of them) and head out to sea, tracking Godzilla with a geiger counter. The evil scientist then dons a diving suit and heads down below to take care of business. Godzilla’s just chilling out at the bottom of the ocean minding his own when the evil scientist sneaks up behind him and gives him the business – killing himself in the process.

The zoologist is sad and so are the friends of the evil scientist for their loss but the rest of Japan are all happy because now their infrastructure ain’t getting all fucked up by a giant monster.

The tone of this 1954 original is rather sombre and the themes it explores of progress vs nature are as relevant today as they ever were.

The set-pieces of the monster destroying things are all set at night which gives the whole thing an extra element of atmosphere and the soundtrack is surprisingly appealing although a little repetitive.

As this film was inspired by King Kong I was looking out to see how the real-time physical effects would hold up against Harryhausens‘ original stop-motion effects and guess what? They’re better (but it’s also 20 years later, so go figure).

The Eastern Eye DVD release of this film comes with it the 1956 Americanised version, Godzilla: King of the Monsters! – a re-edit of the original with additional scenes that insert an American journalist into the action – so now we can not only relate to the film in English but he also provides expository dialogue so that we understand what undubbed characters are talking about. If you have a choice between the two, obviously go with the original.