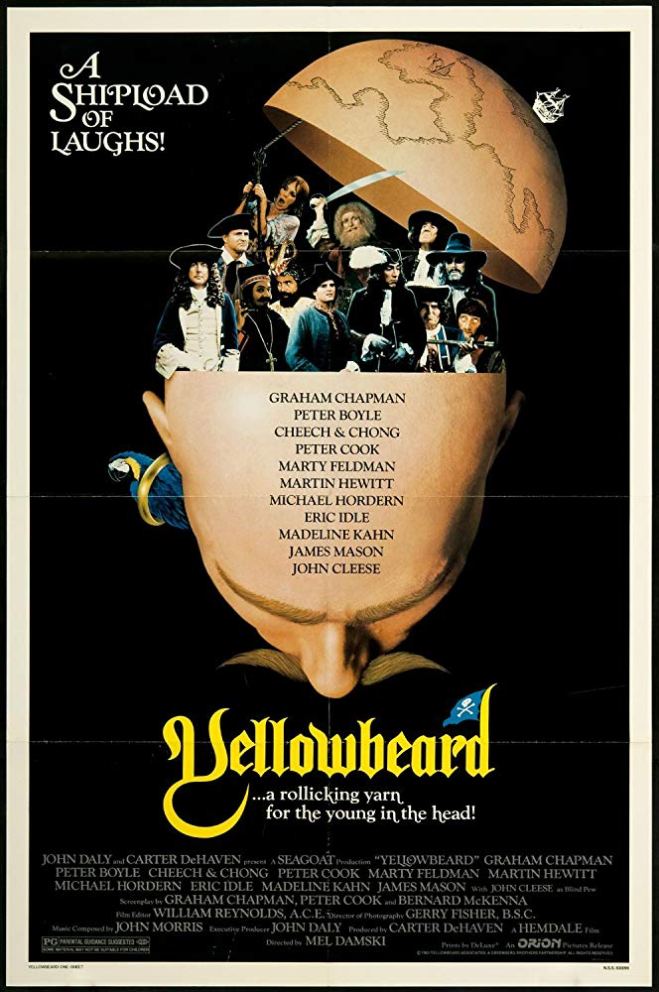 2 of the 3 Pythons that appear in this film said it was the worst script that they had ever read. The other one wrote it, starred in it, and then died. That Python is the late great Graham Chapman. Yellowbeard is another mediocre film with an outstanding cast. The casting call includes half of Monty Python, Peter Cook (who also shares a writing credit), Spike Milligan, Cheech & Chong, Madeline Kahn, Marty Feldman, James Mason and David Bowie as a shark.

As a kid I loved this movie. Its coarse risqué humour was a delight to my pre-adolescent mind. It also helped that it had all these people in it that I knew were funny or great in their own right so this must be the greatest comedy of all time! Sadly the re-watch didn’t substantiate these beliefs.

It’s a well-worn pirate story. A switched on yet unassuming boy finds out that he is actually the spawn of one of the worst pirates on the high seas. He gets drawn in on an adventure to find some treasure and finds that it ain’t such a bad life. The usual tropes are subverted in a comical way to give it flavour but what we’re left with is a handful of talented people working the best they can with what little they have.

The title character was apparently written by Chapman for Keith Moon originally but Moon went and OD’d before that got a chance to happen. Chapman plays the leading man well in a film like Monty Pythons’ Life of Brian or Holy Grail. His straight man in a world of lunacy hits exactly the right notes for him to pull you along for the ride. In this however, it doesn’t quite work. His is the main role but his robust obnoxiousness as a pirate becomes grating. Our ‘everyman’ protagonist, Dan (which was more likely the role Chapman was meant to play) is weak and quite unremarkably played by whats-his-name who went on to do things like something you never watched and that other thing you never heard of with that other guy.

Cleese and Idle put in solid performances and Cheech & Chong do very well as evil (yet very silly) Spanish conquistadors.

Maybe watch this under the influence of something.