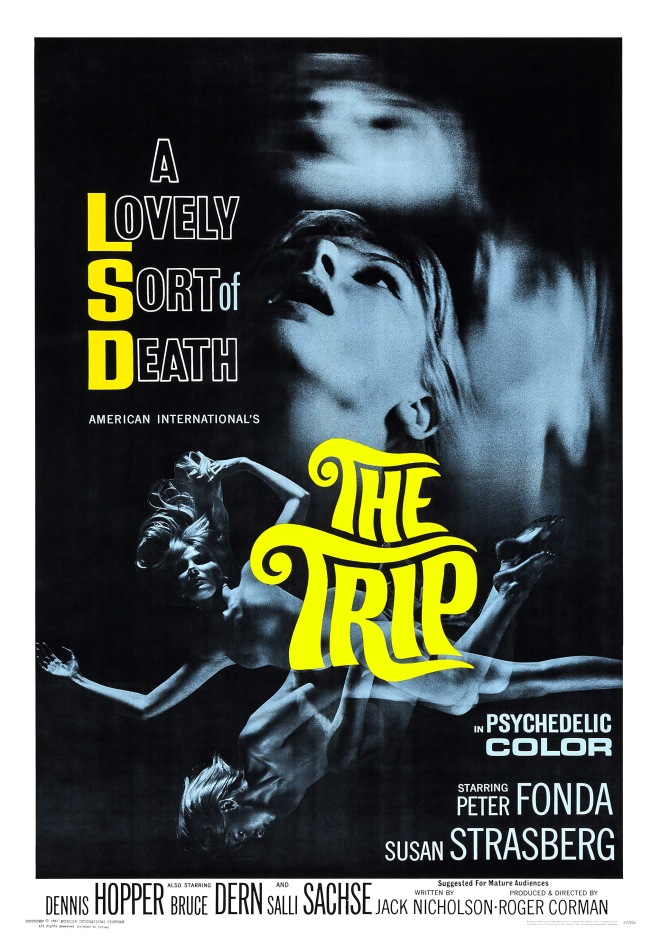 An LSD film written by Jack Nicholson, directed by Roger Corman and starring Peter Fonda! And Dennis Hopper is in there too?! *mind explodes!*

Actually, if you’re familiar with this period in cinematic history, these guys worked with each other in different capacities more than once. Corman directed Nicholson in the original Little Shop Of Horrors (1960) and at around the same time as this one there was Wild Angels with Fonda, then in ’69 the classic Easy Rider (directed by Hopper, with Fonda and himself starring with a cameo by Nicholson).

This is not any of those movies. This is The Trip. Remember that bit in Easy Rider where they took acid in a graveyard? This is that bit stretched out to feature length. It was an interesting time when hippies roamed the Earth, counter-culture became a thing and Hollywood got all obsessed with being freaky and weird.

The Trip is exactly that. The premise is “a man takes LSD for the purpose of experiencing the effects of LSD.” This is what happens. Some pretty top notch effects (for its time) are employed to simulate the acid experience including kaleidoscopes and projected oil patterns. It’s also surprisingly effective.

This movie was banned in the UK and includes a disclaimer at the beginning warning against recreational use of the drug involved. The film is rated R in Australia for Drug Abuse. Note the word “abuse”. Not the plain old “Drug Use” that they attach to films like Requiem For A Dream, Trainspotting and the highly popular TV series, Breaking Bad. Go figure. Any other drug and it’s simply “use” but as soon as acid is mentioned, it becomes “abuse”. I guess the message here is that acid is the devil and will make you a terrible person – much worse than Heroin or Methamphetamines.

The Trip is an experiment with Lysergic Acid Diethylamide and its effects on film making – if this sounds like your bag, you just might dig it.