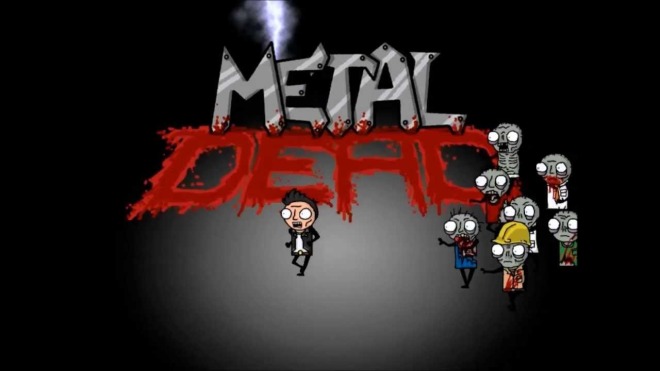 As a casual gamer, I’m always a little behind the curve when it comes to something new. For example, it was only four years ago that I truly immersed myself in the experience that is the point-and-click adventure (about 20 years after they peaked). Equipped with my (relatively) recently solid knowledge of such things, I feel it is my privilege and duty to review this modern take on a well-trodden genre.

Speaking of well-trodden genres, a zombie apocalypse is nothing new but that’s the backdrop for this story, and it’s your job to keep plucky protagonist Malcolm Campbell alive, as well as get to the bottom of who or what is responsible for all the horror.

The game begins with two metalheads, Malcolm and his best friend Ronnie, driving into the heart of the zombie outbreak. Why? Because Ronnie says it’s “the most metal thing that’s ever happened” to them. Unfortunately, the car crashes and you must help Malcolm escape the zombie hordes. To do this you must get Malcolm off the streets and inside the MediGeniTech building (a science research centre) and it is here that he meets the mysterious Dr. Fechenheim who charges Malcolm with helping him continue with his bizarre experiments.

From here, the story leads Malcolm through the building where he will meet a host of characters who either help or hinder him in his efforts to reach the helicopter at the top of the building. Can you help Malcolm save everyone and discover the cause of the outbreak? What does Dr. Fechenheim have to do with all of this?

This comedy/horror game from Walk Thru Walls Studios is your standard 2D point-and-click adventure affair, and even for that, it’s pretty lo-fi. The dialogue is delivered through text, the art and animation is scratchy, and the music is presented in glorious MIDI, which gives the overall experience a DIY edge that makes you think, “hell, I could make one of these!”

And maybe you could, but what this game lacks in flashiness, it more than makes up for with a fun little story and snappy dialogue just like the classic games it pays homage to. The humour is played to full effect with just enough self-awareness and pop culture references to help you forgive its shortcomings.

The art is somewhat reminiscent of that goth comic style (Johnny the Homicidal Maniac, Lenore, the Cute Little Dead Girl) that became popular in the late ’90s, almost cute in its simplicity but obviously drawn by someone with a psychological disorder. It works for this game and has plenty of charm to keep you playing.

On the subject of effective simplicity, the same can be said for the music. Using standard MIDI sounds, Josh Birch delivers a soundtrack that makes you feel like you’re in a John Carpenter movie. There is a surprising degree of versatility in the noise coming out of those speakers using the most primitive of digital sounds.

The puzzles are logical and satisfyingly challenging too. I must admit that I did have to consult a walk-through guide with one puzzle because I missed an element in the narrative.

Basically, if you haven’t played this game and are a fan of Monkey Island, Leisure Suit Larry, metal, and zombies, then perhaps you’re missing out. Metal Dead is a great way to kill a few hours if you still have the patience for the point-and-click adventure.