The exciting news for this week is that the Quest Inn at the Centre of the Universe crew returned to the studio to record material in preparation for a new season. We’re all a little rusty, but it’s great to be back in the same room as these amazing people while they do their thing. The stuff we recorded will be out soon to prepare you for the coming season—so look out for that!

Now I’ve got these session recordings sitting on my desktop, ready for editing. I was going to do it yesterday, but then I thought it might be a good idea to re-learn a song instead. The song in question is Hole Hearted by the criminally lesser-known funk metal band Extreme. If you don’t know this song, you probably know More Than Words, their charting hit from yesteryear.

I’ve always loved this band. I was introduced to them by my brother, who owned III Sides to Every Story on cassette. Released in 1992, this album was the follow-up to Pornograffitti (which featured More Than Words). 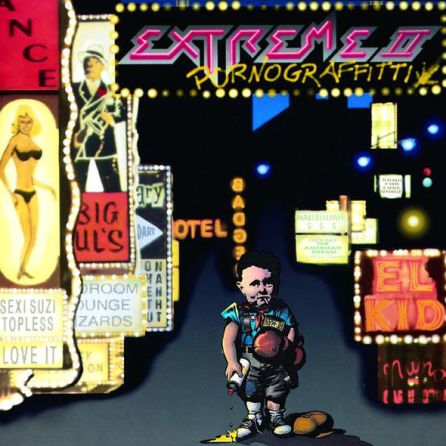 It was maybe 1993 when I got my hands on my brother’s tape, which I ended up borrowing frequently and maybe even playing it way more than he ever did. Indoctrinated by the musical tastes of my family, I was a pretty hardcore Queen fan at age 10. It was around that time when Mr Brian May was turning up on the cover of guitar magazines praising the work of Extreme’s guitarist, a Mr Nuno Bettencourt.

III Sides to Every Story is a hard rock/funk/progressive concept masterpiece. The stuff I heard coming out of the tinny speakers of my beat-up Sanyo tape player was magic to me, and even at that age, I could see why Mr May spoke so highly of this Nuno guy.

Anyway, five years came and went, and then I discovered punk. I still liked my rock and the intricate melodies of Queen and Extreme, but it was the DIY sound of bands like The Offspring, silverchair, and the Sex Pistols that inspired me to pick up a guitar. This was the kind of stuff that sounded like I had a chance of learning how to play it.

Every now and then, I’d try to tackle sections of a Queen song, but would inevitably become disheartened when I couldn’t replicate Mays’ trademark layered guitar sound. I also tried to learn a few Extreme songs, not realising the speed and dexterity needed to pull off those licks until it was too late, when I’d get frustrated and give up.

What I felt I could do, however, was strum along with ballads and acoustic songs. So, I started collecting tablature, which I’d print from the internet using PCs at school or at the library. One of these acoustic songs that I’d learnt to strum along with was Hole Hearted. It sounded okay—as long as I didn’t play along with the recording—and so I settled with this close approximation as having learned the song.

Now, one thing about this song (and all Extreme songs) is that Nuno tunes his guitar down half a step (Eb-Ab-Db-Gb-Bb-eb). I knew this, but I never bothered tuning down as it was a hassle to do it for just one song. This was the excuse I gave myself as to why the parts I played would never sound quite right.

Anyway, now it’s only twenty years later that I have more than one guitar, which gives me the freedom to leave one in standard tuning while the other can be alternatively tuned—See Mum? It’s not excessive, it’s practical.

So, the other day I was watching some old man music on Youtube in the form of Generation Axe. If you’re into guitars (and music in general), this stuff is amazing. Mr Steve Vai has brought together a pretty cracking wishlist of virtuoso guitarists to play together in what, I’m sorry to say, feels like one last grab at keeping this kind of music alive. But guess who made the list? Old man Nuno! After an hour of this, I fell into a Youtube hole to revisit all the performances I could find of Nuno playing with Extreme and…

The first thing I did next morning was drop my guitar down half a step to play some Extreme stuff, and it’s been that way ever since.

So yesterday, instead of editing that podcast audio, I decided to learn Hole Hearted properly. I cued the song up, began to play along, and It only took about 15 seconds to realise that I had no idea what I was doing and had to turn it off. From there I took to the internet to see where I was going wrong and it turns out my approximation of the song was close in terms of notes, but way off in terms of timing. I always played it as more blues-based than funk, which now that I think about it, was removing exactly what Nuno put in to play it in his signature style.

Instead, I called my Dad. For context, I never call my Dad. He’ll back me up on this. It was like that Black Books episode where Bernard tries to do his taxes.

Anyway, I finally got around to doing the preliminary audio editing I wanted to do, which took all of about 10 minutes. I really don’t know why I was putting it off.

I feel like the “jack-of-all-trades master of none” label has always haunted me, but I do like to tinker and learn. Trying my hand at the many things I do brings me joy because I like to do all of the things. This is partly because I really like doing all the things, but also because I get bored if I do too much of the same thing all the time (as detailed in last week’s post). It’s this productive procrastination that gets me through the day.

Maybe one day, if something really takes, I’ll pursue it to mastery. Whether it’s writing, audio editing, being a real human boy, or whatever.

Right now, however, this is how I work—and it suits me just fine.