Last night I spent about two hours moving text around. For all that effort I haven’t even got one extra word to show for it. Upon opening the old files, I learned that my work up to this point (which I’d not looked at since 2018) needed quite a bit of rearranging to align the content of each chapter with my updated chapter summaries and story outline. This story outline is the most recent work I’ve done with this project, which I completed at the end of November 2019 while on holiday in NSW (before it was devastated by fires).

Without the luxury of being able to refer to my notes, story details were entirely reliant upon what I could remember. Most of it was accurate, but the old memory isn’t perfect. Back when I was redrafting the summaries, I knew that adding a few extra chapters would require previously drafted elements to be shifted about, but I didn’t expect to discover whole chapters that I’d written and forgotten about. My original story outline called for 19 chapters (+ prologue). In November, the redraft altered that number to 20 (+ prologue). Last night after discovering two forgotten chapters, we’re now at 22 (+ prologue).

As I revisit and compare these differing summaries and outlines, I’ve given in to the fact that the total number of chapters will fluctuate as I continue to write. There’ll be cuts, splices, and additions as the story reveals itself in more detail, so I probably shouldn’t get too precious about something as arbitrary as a chapter count at this stage – as long as I know where I’m going and how to get there, things should be all right.

Today I attacked the prologue and discovered I have three drafts of it, with each containing a different chunk of information that I want the reader to know as I ease them into the world and the story. The problem, however, is that each draft differs in where the story begins and from whose point of view. To remedy this I’ve compressed the key details from the two earlier drafts into one, and separated the third draft completely and renamed it as chapter one – why, oh why did I want to put the inciting incident into the prologue? I’m sure there was some real fuzzy thinking used to justify that one.

I feel like maybe some of you are judging me right now. Why even have a prologue? While I subscribe to show don’t tell and am generally weary of info dumps in the wild, I’m a bit of a sucker for the old preamble and setting up a few basics of your world in the prologue can free up your first chapter to focus on your character and the action.

On the flipside, as a kid, my approach to prologues was that they were optional reading and I would usually head straight to the first chapter to work out whether the book was going to be worth my time.

Anyway, we’re doing a prologue and today I managed to put a few words down in the manuscript, but I’ve ended up spending more time on this journal entry than on any actual work now. Oh well, it’s early days yet and I still have a week to go before I’m due to post this.

Before I forget though, seeing as what I’ve been working on tonight mostly concerns itself with setting the scene, the additional content I’m sharing with you here are some of the reference images I collected back in 2012 to help me visualise Parochia, the village where my story takes place. 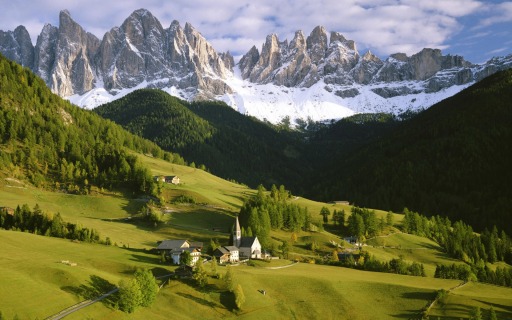 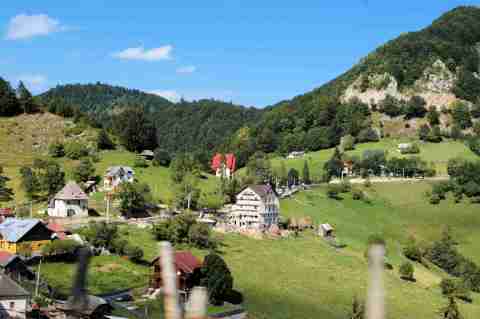 The Gaulish village from the Asterix stories by Goscinny and Uderzo.

The story outline that I mentioned earlier had come together on a train trip from Sydney to Lithgow. This journey cuts across some of the most iconic and breathtaking sections of the Blue Mountains in New South Wales. As a child (and continuing into early adulthood) this route by rail would form the greater part of my preferred method of travel between Sydney and the Central West. Crossing the mountain via the smattering of tiny towns that had been established in colonial times to support the road that links the east to the west, I felt intensely connected to this part of the world despite the fact that this is the first time in over ten years that I have made this trip.

It was a crisp clear spring morning and the sun was slowly climbing its way toward noon when, for the first time in over a decade, I beheld the vista of blue-green eucalyptus valleys, yellow sandstone cliffs and jagged rocky outcroppings that had captivated me to such a degree in my youth.

The reason this near-impenetrable bushland draws folk from all over the world just to have a look, was certainly evident on this perfect morning. As I gazed upon the spectacular view, I paused and took a moment to remember…

Before this complex railway system existed, before the highway was little more than a dirt track, long before the road was tarred and widened to accommodate the ever-increasing flow of traffic, before the little towns full of shops that sell antiques, books, poetry, overpriced paintings and photography from local artists, before every little tea room that serves scones and, if you ask nicely, fresh-brewed coffee too, before the sign-posted bushwalking tracks and viewing platforms, before the buses that bring the tourists, before all of this, there lived the traditional caretakers of this land. This was their home, and this was their way of life. Before our brave colonial explorers came, killed and stole.

This is their land.

One of the many tiny colonial towns along this route is Lawson, which sits somewhere between Faulconbridge (once home to Norman Lindsay) and the hippie mecca that is Katoomba. On my way through while writing my summaries, it struck me that this town had the spirit of Parochia – something about its size and location made me think it might be worth following up to study for reference, so I made a note to do so.

Later in the week at the destination of and reason for making this trip, my mother would show me pictures of her own journey to South West England. In this deluge of holiday snaps was a market town called Stow-on-the-Wold that seemed to exude some of the qualities I hoped for the economic centre of Parochia, and so it was also added to my reference list.

Way back when I was developing the story to be a comic, I spent a lot of time thinking about town layouts. I wanted a believable village that could be drawn from any viewpoint, so if I wanted to put the characters somewhere, say the school for instance, then I would know what to include in the background and which route they’d need to take if they were to walk to the market square (or any other location). As a result, I created a map. It’s a bit rough, but this approach allowed me to play with the elements I knew I would need until I found a layout that felt right. If you’re not that confident with a pencil, I highly recommend this approach as it can really help solidify how your characters will interact in your imagined world. The next step was to start designing the buildings, but that’s another story.

A week has passed, and I’ve done no more work on the manuscript. I think I spent way too much time on this part of the project and allowed myself to go down too many rabbit holes. As an example, where I mentioned earlier the town of Katoomba, I spent an hour recounting a story about going to a pub there with some friends and performing as part of the open mic night. An interesting side story perhaps, but not in any way relevant to this project. I’ve got another hour on the clock before midnight. Perhaps I’ll take a break now and return later to open the document and see if I can get a little work done before the inevitable return of sleep.

Managed to get in an hour or so of work and realised that I must have got some work in on Tuesday night last week as well. This week my goal was to get the prologue up to a thousand words and it’s now at 1611. Job done. Well, not finished but certainly a good start. That said, half the work was simply incorporating pre-written text, but I have been spending a little time ironing it out to get it all to flow a little better. How long should a prologue be anyway? Is the inclusion of a map on the inside cover the usual way folk bypass these things? I know Harry Potter has a map. Can I have both a prologue and a map?

What are your thoughts on prologues, maps and any other additional stuff you’ve found at the beginning of your favourite books? Love or hate it, feel free to let me know in the comments!

One thought on “Aramis Gothboi – Progress Journal: The pros and cons of a prologue”