The week has been… interesting. How good is it going to be before COVID-19 is not the topic of every second sentence? I joked with my father that the old existential dread had started to set in from the isolation, but it’s not too far from the truth. When every news story, conversation, and experience is a reflection or reaction to this thing, even the most apathetic person is going to start feeling the weight of it all.

I thought I was getting sick today. Maybe I am. Is it Coronavirus? Probably not. Either way, one can’t help but begin to understand the damned if you do damned if you don’t mentality that so many of us seem to have adopted as we try to keep on keepin’ on.

Even with projects such as this one and a wide variety of activities to keep me occupied in this isolated time, I’m struggling to keep my brain from thinking about the bigger picture. What’s to become of us? How many are we going to lose? Will the rest of us be okay as the world continues to shut down in the hope that we curb this thing? Is there even a point to thinking about what life will be like on the other side? You know, the happy chirpy stuff. Kind of makes me feel like writing a little story about ghosts and magic is a little bit pointless, yeah?

But I guess that’s the thing about magic – it’s the darkest times when we need it most.

We’re all doing it tough, and so we’re looking to stories in Netflix, comics, and books to see us through to the other side. I might not have a story for anyone today – it just isn’t ready yet – but maybe when I finally will it into existence (and get it published too, I guess) this story can help someone who needs it.

Maybe (probably) my story will go largely unnoticed. If it does get published, perhaps a few friends and family will come along and support the release and I’ll be congratulated for doing a thing that will maybe move a few units through the generosity of my small network of fellow writers and believers in the cause. Perhaps the thing will stick around on shelves long enough for someone to pick it up because they like what’s on the cover. Maybe they don’t really know what they like, but they take it home and read it anyway. Maybe my little story makes a connection and it sets them on a journey to read more, discover more, and take more chances. Maybe it’s just there at the right time in that person’s life to get them through a dark time of their own – and if it helps that person, whoever you are, I’m doing this for you.

…this is the kind of whirlpool I keep finding myself in when I should be sitting down and working on the book.

Speaking of which, the new chapter mentioned in my last entry came easily. I’m yet to edit it, but the writing was free and natural as I put it on the page. I think I may even have taken a side-seat as my characters took over and did what they needed to do. As a result, there were one or two pleasant surprises in how the scene played out, but over-all they were all well-behaved and got us to our destination.

Feeling energised and full of confidence, I moved on to another chapter… and promptly hit a wall. I continued to push on in the hope that my team would start talking to each other again, but what came out was stilted and unnatural. I prodded them some more, but I think they were feeling awkward in front of the new characters introduced in this chapter. So, after a prolonged session of staring at a blank screen, I stepped away for a bit to focus on something else.

Over the following days I came to realise that the issue stems from my newly-introduced characters that had not been developed beyond that of placeholders. One of them doesn’t even have a name. As much fun as it might be to continue referring to her as Mrs Loofah’s Mum, I realised that I can’t write what I don’t know – and I don’t know her at all.

I’ve been mulling it over and am considering a few different angles to approach her, but I really need to sit down and write a scene or two to get to know her properly. That’s the first thing to do when I get the time – it will slow progress on the old word count, but you can’t build a house without a foundation.

As I stumbled on characters, I think I also helped to hinder the process by choosing the wrong music to accompany my writing session.

Ideally, for me at least, music for writing is either familiar enough that it doesn’t distract or pleasantly generic enough that it simply serves as background noise that I can promptly ignore as soon as I get into the writing groove. Often an album will play itself out then I’ll continue the rest of the writing session in silence. I find music helpful to get the ball rolling – as opposed to sitting awkwardly in a quiet room with nothing but the sound of the neighbours doing god-knows-what on the other side of our shared wall.

Film scores and soundtracks generally work for me if the score is more about mood and atmosphere than the attention-grabbing themes that someone like John Williams is so good at. As much as I like a good overture, all they do for me is trigger thoughts of the film itself.

Trent Reznor and Atticus Ross are near the top of my list for making thoughtful soundscapes that help me get work and writing done. I’ve been a Nine Inch Nails fan since I was fifteen. Angst is a pretty easy feeling to latch onto at that period in life, but it was the more contemplative tracks that led to me becoming a lifelong fan. Since Reznor joined forces with Ross to deliver the Oscar-winning score for The Social Network (2010), the pair continue to make music together for both film and as Nine Inch Nails. Their most recent effort, which was dropped on fans last week, is two collections of ambient compositions released as Ghosts V-VI. 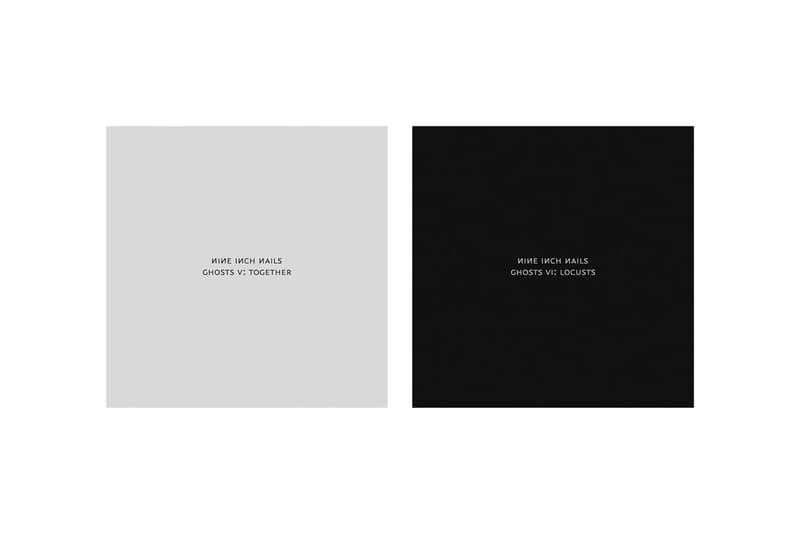 Anyone familiar with Ghosts I-IV may expect a similar mixed bag, but the two new collections are a little more coherent in terms of tone and the arrangement of tracks is perhaps more thoughtful.

Ghosts V: Together is a very listenable journey reminiscent of the soundtrack work we’ve come to know, and was almost instantly incorporated into my writers’ mix for this reason.

On the good word of the former, I stupidly trusted Ghosts VI: Locusts to deliver more of the same, despite the thinly veiled warning on the band’s official site:

Ghosts V: Together is for when things seem like it might all be okay, and Ghosts VI: Locusts… well, you’ll figure it out.

And I figured it out the hard way. Locusts is more about unease than anything else – and even if it is a timely response and accurate representation of the mood to our current situation, it may take you somewhere you don’t want to go and just leave you there to find your own way home, as it did with me. Please handle with care.

In an effort to share the love, I have a few albums that have been doing the rounds in my writers mix as of late. Not all of them are lyric-free, which may be a bit distracting for some, but here’s my top 5:

What’s getting you through at the moment? Do you have a standard writing mix to get you in the mood? Share your thoughts and suggestions in the comments!

Oh no! The Illegitimate Librarian's nefarious plan is finally revealed!
Mike + Liam #006 T3: rise of the coffee machines
The adventure continues in Mexico where the Gila Monster nudges Mike and Liam toward their next challenge and Liam confronts a band of genuine Mexican banditos.
Mike + Liam #005 Fresh
The adventure continues in France where a Checkout Girl helps Mike and Liam with the first challenge of their quest, but is she with them or against them? Their next destination: Mexico, to find the legendary Gila Monster.
Mike + Liam #004 T2: Judgement Day
'The fate of the world rests in your hands. ...yeah, sorry about that.'
The adventure begins! Mike and Liam discover a vagrant living in their hallway cupboard who charges them with a quest to find the Sacred Cookie.
I wonder what this could be...