Not a huge step forward in terms of writing this week. I spent a little time editing a pre-written chapter that, to begin with, was mostly changing the tense until it became overwhelmingly clear that it was actually a terrible piece of writing and so I’ve had to put it through the wringer a few times to get it up to scratch.

I shouldn’t be so surprised that the draft was a bit garbage – it was, I think, the first chapter I developed into long-form from the existing TV script. As you might have guessed, I started writing the chapters of this thing out of sequence with my reasoning being that this chapter was one of the more exciting action pieces featured in the story (and probably the most developed scene in script form).

The redraft was fairly straightforward with a few lines added to align what happens with one or two things from the previous chapter, otherwise the bulk of the chapter remains the same in terms of story because the action of the scene works well.

For a little context, this scene sees Jo (our protagonist) come to blows with Piebald (antagonist) for the second time. At the end of the chapter, Jo is victorious, but must now escape further wrath from Piebald after taking something of value from him. To summarise, it continues the conflict between the two characters, ups the stakes, and progresses the main plot. The biggest challenge I have with this chapter is striking a balance between description and pacing that I’m sure I can fine-tune with further edits.

Having smashed my first milestone out of the park last week, it feels like I am way ahead of schedule and it looks as though I may reach my final milestone a month ahead of schedule. This sense of forward momentum has made me consider that perhaps I should shift my markers and set some new goals. But then, maybe this is a tad premature. I’m sure it doesn’t hurt to think about what I’ll be doing next, but really I should just keep my focus on the task at hand. One step at a time as it were. If I do reach the finish line early, only then should I set new goals. After all, I gave myself space on this project to counter any life event that may throw a spanner in the works. Anything could happen over the next few weeks. Anyway, this was just a thought.

So yes, with this current drafting phase, I’m a third of the way into the story (further pre-written chapters will require the same redrafting as the previously described chapter). I’m feel positive and on track, but I’m also feeling like maybe it’s time to recruit others to give this thing a read, just to confirm this is actually true. One of the hardest parts of writing for a lot of people, I think, is getting the feedback you actually need to push the work in the right direction.

It’s been a while since I’ve put myself under the critical microscope for my writing and I’m happy to report that the prospect is actually a little terrifying. Reaching out this week for people to do just that was no small feat, but I did it and was presented with the reminder that I need to be clear in setting out what kind of feedback I’m looking for (thanks Steph!).

Feedback can take many forms, and even the most innocuous suggestions that people throw your way give can feel for the writer like a dagger through the heart.

In my experience, the best way to get what you need is to be clear in asking for what you want.
Asking is this any good? might give you an answer, but if you want to turn that one-word answer into something constructive, you’re going to have to dig a little deeper with your line of questioning.

What’s good or bad specifically? How’s the tone? Is the POV consistent? How’s the structure? Does the motivation of this character make sense? What could I do to fix this paragraph? How can I improve this dialogue?

If you can focus the attention of your reader to specific elements of your writing, you’re more likely to get the answers you require.

As I said, it’s been a while and I’m a little bit terrified, but this must be done, so along with more chapter progress for the coming week, there’ll also be preparation for feedback too.

This week’s bonus material is all about reference material. When this was to be a graphic novel, I had hopes that the village of Parochia would be just as important a character as any of my main cast. For Parochia to be believable, it would need to look like it could exist in real life. Now, living in the city of Melbourne, you might not think that there are a great many places to gather reference material for an isolated mountain village without driving for at least an hour past the suburbs.

If you’re looking for inspiration from visiting real places and you can’t get to those places physically, sometimes you need to think a little outside the box. This chapter I discussed this week is set in the woods of Parochia. These woods are not overly dense, but are still a great place to hang out and have adventures. The well-worn path through the middle of the wood sees a lot of foot traffic from the villagers, but it’s going off the path and into the wooded areas where all the action happens.

Back in 2012 I lived in Brunswick West. This inner suburb is a stone’s throw from Royal Park (home of Melbourne Zoo), which would be the most logical place to source reference material for trees and the like. Where I lived, however, was down by the freeway, which is mostly cement sound barriers, pylons and overpasses. Alongside the freeway however, is a thin strip of grass that lines the concrete of the aqueduct. Down this way, I found some pretty fantastic areas that still feel secluded despite being in the middle of the city. Here’s a few snaps I took for inspiration.

Also, this chapter is the first appearance of Mr Froggington (AKA Al Green). Here are some of the reference photos I used along with some early sketches and the final design. 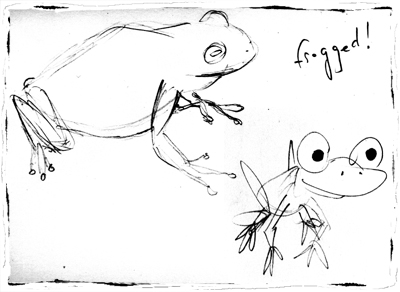 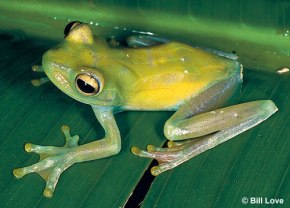 With Google at your fingertips, you can find references for pretty much anything, but there’s nothing quite like discovering and being inspired by the real world. Have you ever found your creative muse in unexpected places? What was it and how did you incorporate it into your story? Let me know in the comments!