God damn it, Pixar! What the hell happened? It seems that every second film these days is a sequel (I know this is a general Hollywood trend but shut up and let me finish – I’m in rant mode here). Cars 2?! Honestly, the first one was the dumbest thing ever! And don’t get me started on Planes (admittedly not a Pixar production but John fucking 3-trick Lasseter is behind it)!

Disney Producers: We need something that kids will really get in to.

Lasseter: How about inanimate objects that… talk?

Disney Producers: You’re a genius. Here’s a bunch of money.

Lasseter: I can do this for years if you like.

Disney Producers: Here’s more money. Make stuff that we can easily sell as toys for kids. We’ve done toys so that’s out.

Lasseter: What about cars?

Lasseter: You think that’s good? I reckon we could do the same thing with planes.

Disney Producers: What are you going to call these films?

Lasseter: I’ll come up with something better later.

He didn’t. And okay, yes. I’m getting a little too worked up over kids’ movies but I’ll tell you why. Pixar promised to be a new frontier for storytelling, picking up where Disney dropped the ball. They’ve been responsible for some genuine classics (the first Toy Story film is one of them but fuck, we don’t need all that energy spent revisiting the same tired world again and again and again…) Wall-E, The Incredibles, Monsters Inc.

Actually, I really enjoyed Monsters Inc. It’s a great buddy movie with heart and a wonderful fantasy/science fiction twist that works perfectly as a stand alone story (if you choose to disregard this little conspiracy that connects all the Pixar films into one universe). There was no need for a sequel.

So what do they do? A fucking prequel! Way to Lucas it up (you can use this expression for any time someone screws with your favourite universe continuity).

Luckily for us, they did a decent job of it. Monsters University tells the story of how Mike and Sulley met to become the dynamic duo they are in Monsters Inc. Many of the original cast make an appearance but it’s the supporting cast of new characters that help this be an entity in its own right (the members of our protagonists frat house in particular). 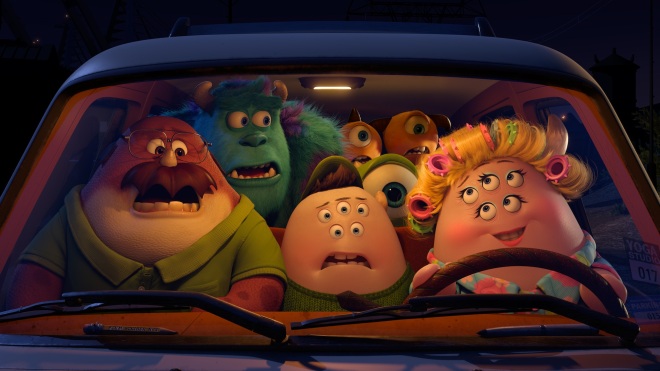 The film follows Mike from early childhood where he first discovers that he wants to be a scarer and the bulk of the plot covers his time at university and the struggles against all odds faced in the attempt to graduate. He’s got the brains but that’s it. Sulley however is a bit of a jock that rides the coat-tails of his family name to get to and through university. He doesn’t apply himself anywhere near enough and through unlikely circumstances the pair are unwillingly thrown together and must resolve their differences if they want to succeed.

There’s nothing particularly new story-wise but enough to keep one interested. That, and the animation is sublime but may make a revisit of Monsters Inc feel a little visually stale (but that’s the nature of rehashing a 10+ year old idea).

Look, you know this will be good. John Lasseter’s nowhere to be seen so his schmaltzy half-arsed ideas have not tarnished a pretty damned decent script and very fun concept of the meeting of the dynamic duo who we grew to love in the original.