Chances are you didn’t run out and see this adventure film starring Will Ferrell, Anna Friel and Danny McBride when it hit the big screen in 2009. And to that I’d say, ‘fair enough.’ What I do recommend however is checking it out now that it’s had time to settle and let everyone forget how much it cost to make.

Land of the Lost was an effects-driven kids TV show from the 70’s that I never saw. Apparently the guys who made it got jealous of other TV shows that had been made into big budget films (Charlies Angels, Lost in Space) and wanted a slice of the pie too*.

Will Ferrell plays Dr. Rick Marshall, a disgraced scientist whose fire for his research gets rekindled when Holly Cantrell (Anna Friel) walks in and shows him something impossible that’s related to his work. They head out to test his invention in the middle of nowhere that also happens to be a 3rd rate family attraction run by a redneck named Will Stanton (Danny McBride). One thing leads to another and they find themselves travelling to an alternate dimension peopled by lizard men, primates and dinosaurs. There are also three moons and a bunch of other whack shit that doesn’t make sense. In this world they meet Chaka (Jorma Taccone), a primate who helps them on their quest to get back home.

In terms of great films this is not one of them, but it’s a hell of a lot of fun. It looks great (directed by Brad Silberling – the guy behind the adaptations of Lemony Snicket’s A Series Of Unfortunate Events and Casper – among other things), this guy knows how to bring stylised worlds to the screen. The script is helmed by Chris Henchy and Dennis McNicholas (SNL alumni) who know how to piece together an entertaining script but also leave enough room for Ferrell and McBride to improvise which is where they both really shine. Anna Friel does very well to counter their lunacy with her ‘straight guy’ approach.

So if you want to see something that’s big, fun and a little bit like a bad acid trip with Will Ferrell riding a dinosaur, this is the movie for you.

*I can not verify this statement with facts as I may have made it up. 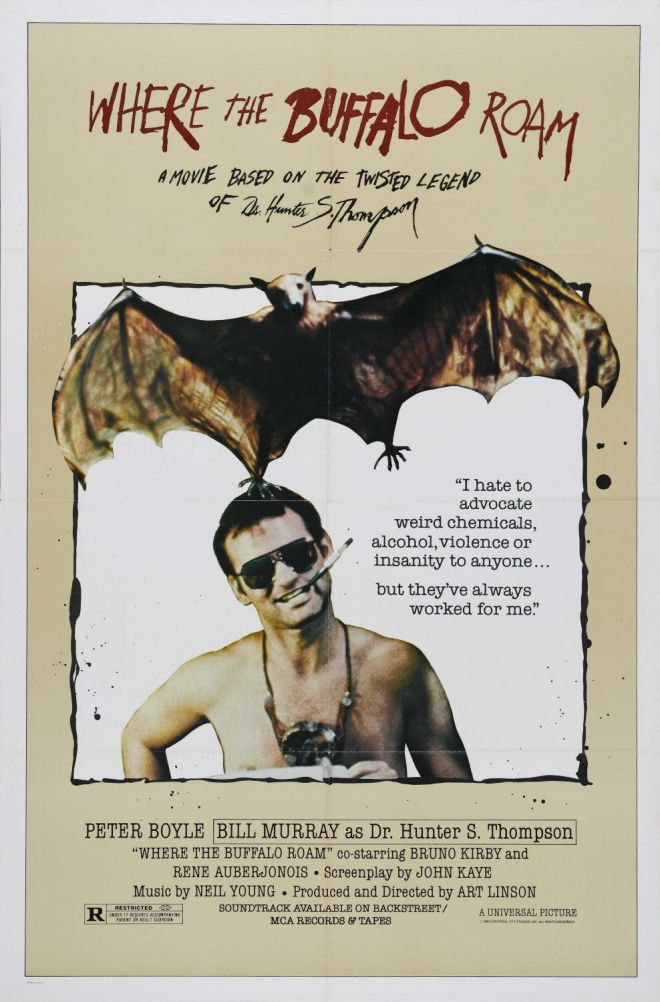 Once upon a time Fear & Loathing in Las Vegas didn’t exist as a film. If you wanted to follow the exploits of Hunter S Thompson you’d have to read something… and if you didn’t like reading then your only other option was Where The Buffalo Roam – a film with Bill Murray playing Dr Thompson and Peter Boyle in the role of Lazlo/Dr Gonzo (his lawyer).

Made at a time when Bill Murray was still emerging through Saturday Night Live, this film shows us his potential as a character actor. He and Boyle play the main roles cartoonish and charismatically but in a world post-Gilliam’s Fear & Loathing In Las Vegas; one can’t help but compare Murray & Boyle to Depp & Del Toro.

The tone is not as dark as Gilliam’s take but that’s not the reason this film is flawed – where Fear & Loathing focuses on one central theme and story, Buffalo is a series of vignettes from Thompson’s work strung together into the loose narrative of Hunter Vs. Nixon and as a result, feels uneven and incomplete.

A major criticism I hear from others about this film is that in its current form it lacks an authentic soundtrack. The “original” score by Neil Young is left intact (original sits in inverted commas as it’s essentially just Neil singing Home On The Range), but the studio has replaced Beatles and Jimi Hendrix tracks with close approximations recorded in a jarring 80’s style – considering the events of the film take place in the late 60’s and 70’s. I maintain however that the inclusion of the original tracks would not help this to be a better movie.

There are some wonderful moments of anarchy but it’s all staged in such a way that it feels as if we’re watching pantomime more than an actual account of events which may or may not have taken place. Considering where we are now in terms of what can be seen on television on a daily basis, it’s hard to know whether this film was ever as edgy as its successor.

If you can get your hands on a copy of this, check it out for a young Bill Murray taking on a great character. If you’re a Hunter S. Thompson fan – just watch Fear & Loathing In Las Vegas again as this one will more than likely leave you disappointed.

Hotel Transylvania. A cartoon family movie with Adam Sandler starring as Dracula – what’s to like about that? …Quite a lot, actually.

Directed by Genndy Tartakovsky (Dexters’ Lab, Samurai Jack) and a screenplay by Peter Smigel (Saturday Night Live) and Peter Baynham (Borat, I’m Alan Partridge, Arthur Christmas), this film is pleasantly surprising. I’m quite a fan of the Animated family film genre but not everything is gold. I like good animation, unusual character voice choices and witty scripts. I approached this with one trepidation but it turns out that it has all three.

Often when an Adam Sandler project comes out, a groan of “here we go again” follows from fans and critics alike. The man has built himself a niche market not unlike Martin Lawrence or Rob Schneider for broad appeal bland family films where you can almost see how dead he is behind the smiling eyes of whatever semi-retarded character he’s bringing to the screen this time. Perhaps it’s because we can’t see him that this works – his performance feels to me like he genuinely enjoys the character, not unlike Steve Carrell’s Gru in Despicable Me.

The story follows Dracula who has set up a hotel in remote Transylvania, tucked away from the prying eyes and pitchforks of humans where all monsters can come to be themselves and not worry about being run out of town or killed. Every monster you can think of makes an appearance here and they’re all deliciously played by past Sandler/SNL collaborators including Andy Samberg, Kevin James, Steve Buscemi, David Spade and Jon Lovitz.

Dracula has a daughter, Mavis (Selena Gomez) who is coming of age and curious about the outside world – a curiosity that Dracula tries hard to quell to keep his daughter safe from harm. Everything is going fine until the world in the form of Jonathan (Samberg) comes to them.

As a family film it has its share of fart jokes and terrible pop music that I can only assume that the kids are into these days so if that’s not your kind of thing there will be moments of, “Why am I watching this?” but they are few and far between.

Give this one a go. You might be pleasantly surprised.